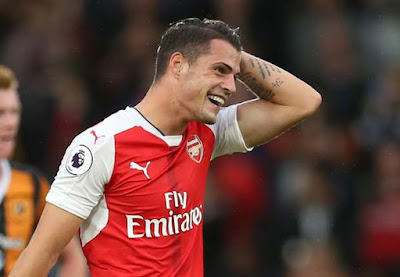 Arsene Wenger has a selection dilemma on his hands ahead of Saturday’s mammoth Premier League clash against London rivals Chelsea.

The Frenchman faces a decision to make over who will start in central midfield, with summer signing Granit Xhaka pushing for a place in the XI after scoring in his last two games.
Francis Coquelin and Santi Cazorla’s midfield partnership has worked successfully so far but Wenger could be tempted to throw Xhaka into the mix due to his physical attributes and defensive capabilities.
While midfield remains an area where Arsenal are spoilt for options, Gunners striker Olivier Giroud requires a late fitness test to determine whether he will be involved on Saturday.
Alex Iwobi looks set to continue in the starting line-up after getting his third assist of the season against Hull last Saturday and it’s likely to mean a return for Theo Walcott on the right hand side following his absence from the EFL Cup game at Nottingham Forest. 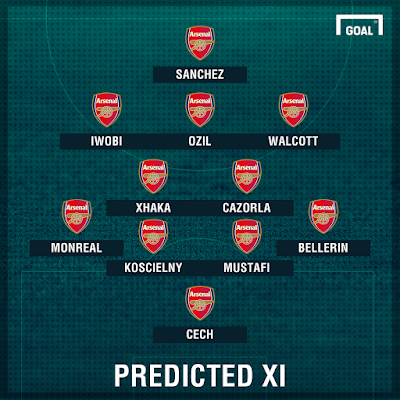 There is still no return in sight for Aaron Ramsey who is struggling with an ongoing hamstring injury and Wenger confirmed in his pre-match press conference that he’s unlikely to be available for Arsenal’s next two games against Basel and Burnley.
“He is not completely free in his mind yet to push completely, so we stop him every time when he has a little pain. He is in the last days of his rehab and as long as he is not completely comfortable, we do not push him.
“We had a few disappointments because he was close to joining again and every time he is not completely ready. Not far, but we have to be cautious with him.”
Tweet
Share is Caring
ALSO READ  (Video) Being punctual and treating everyone at Arsenal with respect helped me go this far- Nigeria's Alex Iwobi says

Alex Iwobi set for new £50,000 per week contract at Arsenal, his second pay rise this year