Paul Allen who co-founded Microsoft Corp. with fellow billionaire Bill Gates and used the fortune he made from the iconic technology company to invest in professional sports teams, cable TV and real estate, has died. He was 65.

Allen died on Monday in Seattle from complications of non-Hodgkin’s lymphoma, according to a statement from Vulcan Inc., his investment firm. Allen’s source for his varied investments and sizable charitable donations was his once-major stake in Redmond, Washington-based Microsoft.

Allen, along with Gates, helped create an entire industry selling software for a new breed of smaller, more affordable and widely accessible computers.

“I am heartbroken by the passing of one of my oldest and dearest friends,” Gates said in a statement. “Paul was a true partner and dear friend. Personal computing would not have existed without him.”

Allen stepped down as an officer of the company in 1983 because he was grappling with Hodgkin’s lymphoma. In 2009, Allen was treated for non-Hodgkin’s lymphoma, which two weeks ago he said had returned.

“A high-tech demigod” is how Sports Illustrated described the man who came up with the name for Microsoft, a company whose ubiquitous products include the Windows operating system and the Office suite of software. “He is one of the richest men in history, a figure of such dizzying wealth and eclectic tastes that he recently donated $100 million to brain research and $25 million to the search for extraterrestrial life,” the magazine wrote in a 2007 profile. 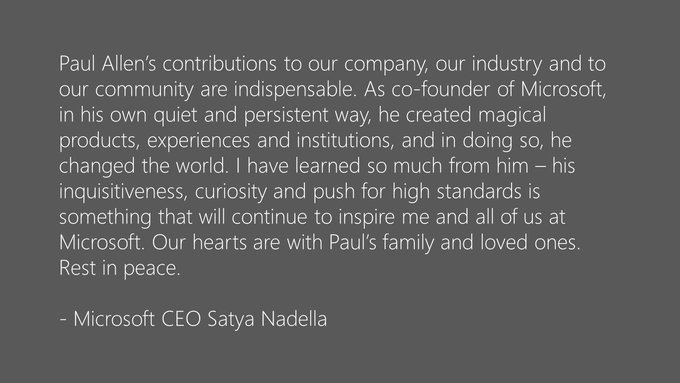 Paul Gardner Allen was born on Jan. 21, 1953, in Seattle to Kenneth and Faye Allen. His father was a university library executive and his mother was a teacher.

Allen went to the Lakeside School, where he met a younger Gates and the two worked on early computer programs in the school’s lab. In a time when computers were rare, Allen lurked in the University of Washington computer labs, using the machines and aiding students and professors. Finally, a professor asked if he was actually a student and Allen was forced to admit he wasn’t. But he was allowed to stay, as long as he continued to be helpful, Allen said in a 2017 interview.

He attended Washington State University but didn’t graduate, dropping out and moving to Massachusetts to be closer to fellow computer aficionado Gates, who was attending Harvard University.

In 1975, they founded a company they called Micro-Soft in Albuquerque, New Mexico, after Allen saw a new Altair computer kit on the cover of Popular Electronics magazine and realized computer prices would drop and software would be necessary.

As they struggled to produce operating software for Altair and International Business Machines microcomputers, Allen was regarded as the brains of the partnership, while Gates was the marketing whiz, according to Laura Rich, author of “The Accidental Zillionaire,” an unauthorized biography of Allen.

Allen, a Microsoft general partner, initially held the title of vice president. When he left in 1983 for health reasons, he was executive vice president in charge of research and new product development. He remained on the board until 2000 and was a senior strategy adviser after that.

“Paul Allen’s contributions to our company, our industry and to our community are indispensable,” Microsoft Chief Executive Officer Satya Nadella said in a statement. “In his own quiet and persistent way, he created magical products, experiences and institutions, and in doing so, he changed the world.”

Allen was the world’s 27th richest person on the Bloomberg Billionaires Index. Vulcan, formed in 1986 as the chief investment vehicle for his life after Microsoft, became one of the most prominent family offices globally thanks to its high-profile bets on real estate and space. The billionaire, who signed the Giving Pledge in 2010, said he planned to dedicate the majority of his fortune to philanthropic endeavors including wildlife conservation and brain-cancer research.

“Paul wasn’t content with starting one company,” Gates said Monday. “He channeled his intellect and compassion into a second act focused on improving people’s lives and strengthening communities in Seattle and around the world.”

Allen also assembled one of the world’s most celebrated art collections. A public exhibition of 28 pieces in 2006 showcased works by Pablo Picasso, Claude Monet and Roy Lichtenstein. His mega-yachts were a frequent sight at ports worldwide.

A rabid sports fan, Allen bought the Portland Trail Blazers, a National Basketball Association franchise, in 1988 for $70 million. That investment was a success — the team repeatedly made the NBA playoffs after his purchase, and by 2018 Forbes estimated the team was worth $1.3 billion.

“Paul Allen was the ultimate trail blazer – in business, philanthropy and in sports,” NBA Commissioner Adam Silver said in a statement. “As one of the longest-tenured owners in the NBA, Paul brought a sense of discovery and vision to every league matter large and small.”

In 1997, Allen bought the Seattle Seahawks, a National Football League team, and took a minority stake in a professional soccer team, the Seattle Sounders. He also bought The Sporting News.

Among more mainstream businesses, Allen acquired 80 percent of Ticketmaster Entertainment Inc. in 1993 for $242 million and sold almost half of that company’s stock to Home Shopping Network for $209 million in HSN shares. He bought control of Charter Communications in 1998. Charter’s 2016 purchase and merger with Time Warner Cable made it the second-largest U.S. cable company.

Allen also used his Microsoft fortune to fund scientific endeavors. He was the founder of the Allen Institute for Brain Science and the Institute for Cell Science. He also financed deep-sea exploration teams that located sunken World War II warships, such as the USS Indianapolis and USS Lexington.

Allen was the sole investor behind SpaceShipOne, a suborbital commercial spacecraft that climbed to an altitude of 377,591 feet in 2004, the first privately funded effort to put a civilian in suborbital space.

An avid Jimi Hendrix fan, Allen taught himself how to play the rock standard “Purple Haze,” winning praise from legendary music producer Quincy Jones for his talent, according to New York magazine. He also recorded a blues album with Chrissie Hynde, lead singer of the Pretenders, and used his Vulcan Productions unit to finance films, such as the series “The Blues.”

Allen wrote an autobiography, “Idea Man: A Memoir by the Co-Founder of Microsoft,” in 2011. In it, he recounted how Gates tried to buy out Allen’s minority stake in the company in 1983, offering $5 a share. Gates rejected Allen’s counteroffer of a $10 minimum. Allen said that was a lucky break for him because he would have lost billions in value by selling at that point.

When Microsoft went public in 1986, it had a list price of $21. The company, which posted revenue of $110.4 billion in its latest fiscal year, ended Monday with a market capitalization of more than $825 billion.

Allen also made a mark in various Seattle institutions. In addition to his ownership of local sports teams, he supported the arts, made property investments that converted South Lake Union into a booming technology hub that is home to Amazon.com Inc. He contributed significantly to the University of Washington’s computer science program and biomedical research.

“He’s been under-recognized for all the things he’s done for Seattle,” said Tom Alberg, managing director of Madrona Venture Group. “We tend to look at political leaders, and here we have someone not giving speeches, but building things important for Seattle and our future. Not a lot of people do everything from philanthropy to sports to technology to urban development.”

Allen is survived by his sister, Jody Allen, who is a co-founder and executive director of the Paul G. Allen Family Foundation.

London Bridge Attack: “We need the Travel Ban as an extra level of safety!” – Trump